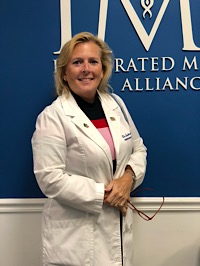 Stephanie Reynolds is originally from South Orange and graduated cum laude from Hunter College in New York City, studied Medicine at New York College of Osteopathic Medicine and did her residency in Emergency Medicine at Long Island Jewish Medical Center. After her residency she spent 2 years at Queens General Hospital and taught for Mount Sinai School of Medicine. In 2006 she relocated to Monmouth County and accepted a position in the Emergency Department at Riverview Medical Center. After a few years she became the Medical Director and Chairman of Emergency Medicine, a position she recently stepped down from. Stephanie has been an active member in her community serving as a Trustee on the Beauty Foundation and serving on various committees as well as offering her services to many organizations. She has earned Physician of the Year, as well as Community Volunteer Award for her work throughout Monmouth County.